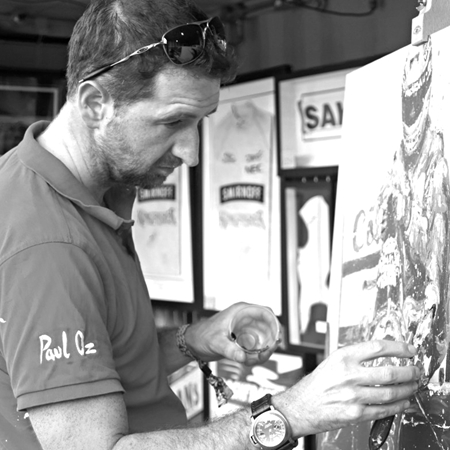 Paul Oz is one of the seminal names within British art. Having built an extensive collector base internationally that includes the likes of Jenson Button, Sir Alex Ferguson, Wretch32 and Theo Paphitis, the ever renowned Oz has in the past decade become one of the nation’s most collectable and exclusive artists.

The versatile Midlands based painter and sculptor has rightfully earned his place at the top table of commercial art with his portraits and sculptures instantly recognisable due to their ‘explosive’ nature, something Paul Oz is credited as the premier worldwide artist of his kind.

With such an impressive body of work and a global fanbase it is unsurprising that Paul’s portfolio attracted the support and collaboration of some of the world’s most successful brands leading to Oz working alongside the likes of Red Bull, Selfridges and Pirelli.

Solo shows in London, Monaco, Singapore and Mexico City have courted considerable media interest and firmly established Paul’s already growing reputation, which lead to a desire to use his new found success for charitable purposes. Paul is incredibly proud to use his name as a patron of ‘It’s In The Bag’, one of the UK’s most important testicular cancer awareness charities, alongside fanastic work with Great Ormond Street Hospital amongst others.

Oz has created work for the likes of Sir Bradley Wiggins, Jenson Button and Muhammad Ali on a commission basis – as well as the families of Ayton Senna, James Hunt and Bruce Lee – Paul’s undeniable allure, captivation and ability to enthral his audiences have long been a source of great admiration.

We have had the pleasure of hosting a solo exhibition with Paul in 2018 and launching his wildlife collection at the presitigeous Poggenpohl kitchen showroom.

Paintings for Sale By Paul Oz