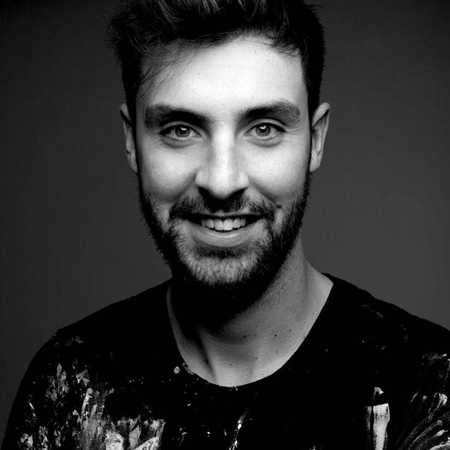 Edward Waite was born in 1989 and grew up in a seaside town on the east coast of Lincolnshire. Throughout his school years he took an active interest in art always searching for interesting styles. Growing up by the sea, he was forever surfing the waves with his friends and this gave him his first idea for a style of painting, surfing silhouettes. His style soon changed when he started at University. Being left to his own devices and interpreting the subjects he was given helped his creative mind. He was later to develop his current style after moving to Lincoln.

Painters Kiefer, Pollock and Kline were influences as he studied for his Fine Art Degree. Pollock’s process capturing physicality, Keifer’s surfaces marks and layering provoking mood and Kline’s gestural composition are all referred to as he paints.

Says, Edward, ‘I work with urban scenes rather than rural landscapes as I see the countryside as a picture already created, however within an urban environment it is often necessary to create a picture of beauty using the architecture and cities in which we live and visit…

My work develops as I build experience with those cities and I believe I create a direct and tangible feel. I start by drawing in sketchbooks which are filled with continuous marks, responding to my subject in a quick and portable way. The process of walking and drawing and the desire to keep repeating makes me look deeper and harder at my surroundings. Each page shows a single view, but collectively placed they form a large composition, collapsing the same subject together’.

In September 2015, Gallery Rouge hosted a solo exhibition of Ed’s work ‘Home and Away’, consisting of over 25 original cityscapes.

Paintings for Sale By Edward Waite